Since this is a story about gardens, I thought it best to set a featured image taken by my most talented cousin, MLG. She said I could use the picture. I write about basil a lot, so it’s only fitting that this praying mantis sits atop a lush stalk of basil while staring down a humming bird on the feeder. I think she should win a photography contest for this shot!

While I have my own garden, the wonderful thing about having friends and colleagues who have green thumbs is that we don’t grow the same vegetables. Thus, one gets a great variety of veggies and fruits when other gardeners share their bounties.

My colleague, BH, possesses a green thumb that allows peaches that we continue to enjoy thanks to last year’s crop. We are down to the last two frozen bags, and he tells me that a late frost nipped the trees buds last Spring. Not to fear, though, because the Japanese eggplant, chilies, and tomatoes are “going crazy!”

For the eggplant Parmesan, I cooked the tomatoes in a bit of olive oil until I could remove the peelings and mash the pulp to cook down into a paste. I cooked the tomatoes with onions, garlic, and two fat hands full of fresh basil leaves. My own garden is crazy with two pots of basil, and three plants in the ground. I planted extra basil to make sure, at least, one survived. Who knew all of the plants would survive, indeed, thrive! Back to the marinara sauce for the eggplant Parmesan. Once the sauce thickened, I put two big dollops of pesto! I have 40 half pints of different varieties of pesto in the freezer, and I keep one jar in the refrigerator to use randomly in food preparations. Sadly, I did not take a picture of the marinara sauce. I prepared half of the 16 ounce (450g) bag of penne pasta. I tossed the cook pasta in half of the marinara I had prepared with 10 tomatoes, half an onion, three cloves of garlic, and kitchen pepper (more on that later). Oh, I tossed the sliced Japanese eggplant in egg then in corn flour (ground yellow corn), and fried them in butter! 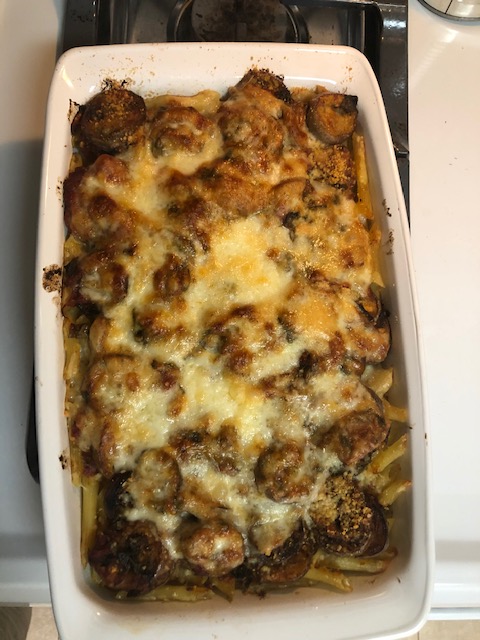 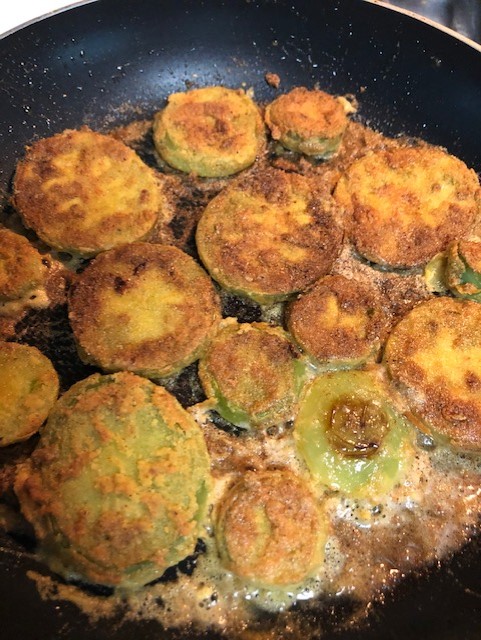 I read about “Kitchen Pepper” when I was doing research on recipes and the cooking or baking of other enthusiasts. I found this on another WordPress website called, “Savoring the Past, ” which noted this from “A Lady’s Assistant” by Charlotte Mason, 1777. It was suggested that Kitchen Pepper developed any recipe into a savory dish. I have now added Kitchen Pepper to potato salad, grilled salmon, marinara sauce, and in a chocolate cake. The ingredients, individually, will surprise you, and you may not think they should be in such recipes. I can tell you that any where you would put seasoned salt, kitchen pepper can add greater depth in a flavor profile. Here’s the recipe:

black pepper, cinnamon, cloves, and nutmeg (all should be ground well)

Mix all of the ingredients well, and store in a tightly-sealed jar, preferably with a shaker fitting.

My friends Paula and Phil visited, and brought vegetables from their garden. We ate fresh tomatoes, and I will make more marinara sauce tomorrow. Phil presented me with a bag of very nice pickling cucumbers. I had eaten some “spicy maple bourbon pickles” that someone had brought to a party, so I thought I’d try making some of those, since I had some peppers in my garden and BH had presented me with some from his garden. I went to my trusty “Ball Canning Book” for the proper ratios of the ingredients to which I added one modification. I replaced the white sugar with pure maple syrup, but I did not add bourbon. Maybe next time. My ingredients for my version of spicy maple pickles:

For each jar, I place sprigs of fennel, a sprig of rosemary, two chilies, 1 clove of garlic, and sliced cucumbers and sliced green tomatoes. I heat brine to boiling and pour over the vegetables for five minutes, and then I pour the brine back into the pan to bring to boil. Then I pour the boiling brine on the vegetables, seal, and process for 15 minutes in a boiling water bath “canner.” If I want a crispier pickle, I seal the jars after I pour in the boiling brine. I cool them on the counter and place in the refrigerator. The recommended 15 minutes boiling water bath often yields a slightly less firm pickle. The pickles are delicious with your eggs in the morning or with slices of cheese as an appetizer. They are great with sandwiches, too. Be creative.

For my parting shot, I offer a picture of me with my wonderful hibiscus plant, which yields 3-5 blooms per day. We eat our breakfast on the front patio with the plant every morning since we acquired “her” two months ago.

Thank you for reading my blog.

I am a geographer specializing in human systems. My passion is studying underrepresented populations so that I can assist in their integration into the communities in which they live. I studied Human Ecology because it is a wonderful blend of the disciplines of geography, anthropology and sociology. No matter the context in which I find myself, I am an observer of humans in their environments and how the influences in those settings build and nurture sense-of-self, sense-of-place, and sense-of-direction in educational, familial, and community settings. My work focuses on the cross-cultural and intercultural traditions of multi-lingual populations acculturating into their receiving communities and being successful in educational arenas of higher education. This work includes gathering, analyzing, and writing about health, well-being, and environmental/social connectedness in their communities. My research focuses on Minority-majority, rural, Midwest communities. My role as director of intercultural learning and academic success at Kansas State University allows me to discover more about myself as I work with others in their paths to self-discovery in their own interactions with students and families who come from different parts of the country and the world all converging in educational spaces. Recently, I lived, worked and played in Southwest Kansas, a region marked by Minority-majority populations centers (56% – 68%). Some of my research results are used to address poverty, low educational attainment, poor health outcomes, and cultural norms in multi-cultural settings. I work to assure a representative sample for my research, so I engage in multi-lingual research (English, Spanish, Burmese, French, Tigrinya, and Somali). Building trust and relationships is the key to my success as a multilingual researcher. Presently, my research takes me in the micro-communities of populations represented by nine African countries (Eritrea, Ethiopia, Sudan, Kenya, Senegal, Uganda, Ivory Coast, Somalia, and Cameroon), seven Latin American countries, and six Asian countries. Yes, it is rural Southwest Kansas, and many of the densely-settled and frontier rural communities act as receiving centers for refugees and other displaced populations, because of the availability of jobs. I am the recent recipient of National Geographic Society’s Research and Exploration grant to introduce Geographic Information Systems (GIS) to females of color. This inter-generational, intercultural class hosted middle school, high school, and adult females who learned the basics of GIS with a variety of applications from remote sensing to city planning to Google Earth, and to Pokémon GO! By the time the young ladies finished the class, they were able to build cities, map their communities, log trips from their countries of origin to the Midwest. I am in the mid-year of the grant funding, and my target for completion was July 2018. I have new funding to extend this work to new cohorts. View all posts by djhbolton