About week ago, my co-worker, Mirta, told me her brother-in-law goes fishing in Canada.  Well, he gave her a halved salmon, which weighed about seven pounds (3.18 kg).  I wished I would have taken a picture of it.  Mirta told me that her attempts to cook any of the salmon provided by her brother-in-law have been disastrous!  Actually, her daughter told me that. So, I said, “Bring the salmon to me, and I will make dinner for you!” As you may imagine, seven pounds salmon provides more than one meal.

On the first night, I made salmon and pineapple, the featured image.  I should have taken the picture after it was baked!  I snapped this one just before baking. I does  not look as interesting.  My friend share this with me. Here’s the recipe:

Spread the pineapple on the bottom of a baking sheet.  Lay the salmon, skin side down,  on top of the pineapple.  Then mix the topping.

Combine in a bowl:

Mix well and spread on salmon.  Bake at 375 degrees (190.6 Celsius) until salmon begins to become opaque and shows a little whitish “ooze”.  It also begins to flake a bit.  Before I put the salmon on the table, I toss toasted, crushed sesame seeds and copped green onions.

Mirta, her daughter and two friends joined us for this meal.  I served it with a Sauvignon Blanc, sauteed green beans, and brown rice with a Waldorf salad made with Colorado honey crisp apples. We ate only one quarter of the salmon, which meant three more nights of “left-overs.”

The next morning, since we had the salmon and the rice, we make breakfast friend rice.

I love to use my wok, so this is the perfect time for it.

Sweat green onions and celery.  Add two eggs. Cook until eggs are finished.  I used the left-over green beans from the previous night and a few chunks of the pineapple. Add cubed carrots and peas. Add cooked rice.  (Ours is cooked in a rice cooker, which keeps it at the proper temperature for two days).  Add the Salmon.  Season with soy sauce and Siracha. Cook it all well.  Serve hot!

The Third night: Salmon and Rice

My husband’s mother grew up on Hawai’i.  She and her family came to the Islands from the Azores.  One of Mama Mathilda’s favorite dishes was “salmon and rice” which she made from canned salmon. for this recipe, I used another chunk of the fresh salmon from two nights ago.

Cook until sauce has thickened.  Then add 16 ounces (0.453 kg) salmon.  Cook until the salmon is cooked through and the sauce is rather thick.  Serve over hot rice. 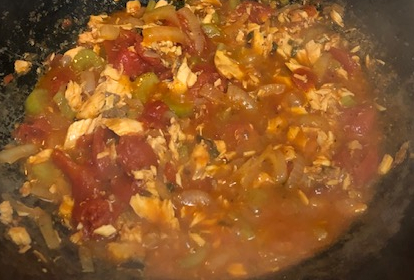 On the fourth and final day of using Mirta’s salmon, my plan was to make salmon patties to be served with toasted sourdough bread and condiments.  However, after a long day at work, I got lazy and made salmon fried rice again!  I do not have the habit of preparing the same meal twice in a week, but we really like salmon fried rice!  Mostly, I followed my recipe, as previously outlined, but this time, I used the remaining roasted pineapple, which gave a wonderfully sweet and savory flavor.  We enjoyed this meal with sparkling water as our beverage. 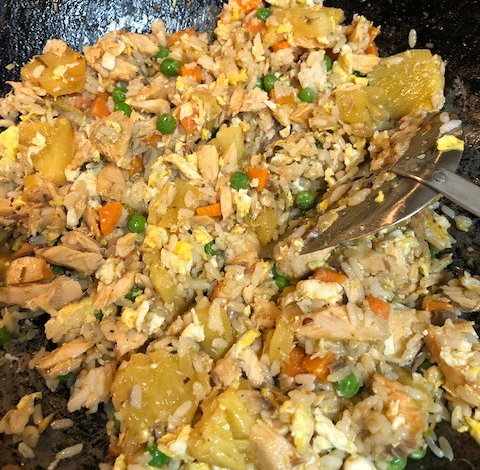 Even when the most horrid day at work happens, there remains the delights of creating something tasty for an evening meal.  It’s great therapy and good medicine!

My favorite cookbooks are those without measurements, like Pino Luongo’s There’s a Tuscan in the Kitchen.  He tells stories of the foods of his region in Italy.  He describes the history and the genealogy of the region, and outlines what you need to make these dishes.  Because he describes the emotions and the tastes, he leaves it to the reader to determine the measurements.  I’ve made some of my guests’ favorite dishes from that book.  As previously blogged, also I love Sean Sherman’s The Sioux Chef’s Indigenous Kitchen. It reminds me of my grandmothers’ cooking.  Experiment in your kitchen!

Thank you for reading.

I am a geographer specializing in human systems. My passion is studying underrepresented populations so that I can assist in their integration into the communities in which they live. I studied Human Ecology because it is a wonderful blend of the disciplines of geography, anthropology and sociology. No matter the context in which I find myself, I am an observer of humans in their environments and how the influences in those settings build and nurture sense-of-self, sense-of-place, and sense-of-direction in educational, familial, and community settings. My work focuses on the cross-cultural and intercultural traditions of multi-lingual populations acculturating into their receiving communities and being successful in educational arenas of higher education. This work includes gathering, analyzing, and writing about health, well-being, and environmental/social connectedness in their communities. My research focuses on Minority-majority, rural, Midwest communities. My role as director of intercultural learning and academic success at Kansas State University allows me to discover more about myself as I work with others in their paths to self-discovery in their own interactions with students and families who come from different parts of the country and the world all converging in educational spaces. Recently, I lived, worked and played in Southwest Kansas, a region marked by Minority-majority populations centers (56% – 68%). Some of my research results are used to address poverty, low educational attainment, poor health outcomes, and cultural norms in multi-cultural settings. I work to assure a representative sample for my research, so I engage in multi-lingual research (English, Spanish, Burmese, French, Tigrinya, and Somali). Building trust and relationships is the key to my success as a multilingual researcher. Presently, my research takes me in the micro-communities of populations represented by nine African countries (Eritrea, Ethiopia, Sudan, Kenya, Senegal, Uganda, Ivory Coast, Somalia, and Cameroon), seven Latin American countries, and six Asian countries. Yes, it is rural Southwest Kansas, and many of the densely-settled and frontier rural communities act as receiving centers for refugees and other displaced populations, because of the availability of jobs. I am the recent recipient of National Geographic Society’s Research and Exploration grant to introduce Geographic Information Systems (GIS) to females of color. This inter-generational, intercultural class hosted middle school, high school, and adult females who learned the basics of GIS with a variety of applications from remote sensing to city planning to Google Earth, and to Pokémon GO! By the time the young ladies finished the class, they were able to build cities, map their communities, log trips from their countries of origin to the Midwest. I am in the mid-year of the grant funding, and my target for completion was July 2018. I have new funding to extend this work to new cohorts. View all posts by djhbolton

One thought on “Four Nights of Salmon”